The glory belongs to God

The kingdom! The power! The glory! These words resound through this week’s Bible Lesson titled: “Is the Universe, Including Man, Evolved by Atomic Force?” They evoke the awesomeness of God and leave no doubt that “all things were made by him; and without him was not any thing made that was made” (John 1:3, citation 1).

Genesis 1 presents, in seven days, the spiritual standard of evolution. God speaks and the universe appears. Each section of the Lesson incorporates one of these seven days to demonstrate that “the true theory of the universe, including man, is not in material history but in spiritual development” (Mary Baker Eddy, Science and Health with Key to the Scriptures, p. 547, cit. 9). Literarily, many scholars believe that Genesis 1:1—2:3 comes from P, the Priestly Source, whose writer(s) focused on the majesty and transcendence of God. With symmetry and orderliness, the six days are organized in two sets. In the first three days, God creates the habitations—light/sky and sea/earth. In days four, five, and six, He creates the corresponding inhabitants—celestial bodies/birds and fish/animals and humans. When God ended his work on the seventh day, He blessed it. The Israelites’ observation of this Sabbath day of rest was unique in the Ancient Near East.

Kathleen “Kat” Collins is a Christian Science nurse and has a master’s degree in Bible studies.

Send a comment to the editors
NEXT IN THIS ISSUE
How I Found Christian Science
'I knew my life was changed forever...' 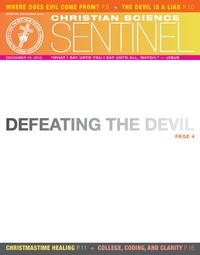