TAKE YOUR QUIETNESS WITH YOU

FOR THE LAST couple of years I lived in New York City, rightfully known as "the city that never sleeps." For someone from New Mexico, Manhattan was as noisy as I imagined a city could be. We lived right next to a building site, and for several months workers had to blast through solid rock to lay the new foundation.

Actually, the construction noise next door wasn't nearly as loud as what I heard waiting for the subway every day—subway tunnels seem to hold and concentrate all the echoing noise on the platforms. When an express train would speed through my station, people often would hold their ears and close their eyes.

Mark Swinney and his family live in Albuquerque, where he teachers and practices Christian Science healing. 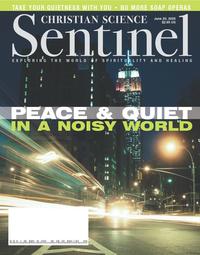