When I first became acquainted with Christian Science, I was under medical care for an infection. After a few examinations, it was determined that I had kidney stones. The doctor prescribed various medications, and I took all of them for a long time, but the infection did not go away. He then told me I would have to have surgery to remove the stones, because they were causing the infection. I became very afraid and upset. At the time, I was visiting a Christian Science practitioner on a regular basis, but we always talked about some relationship problems that I was trying to solve. I hadn't told her about the medical treatment because it didn't even occur to me that Christian Science could also help me with health problems.

I remember that after the medical visit where surgery had been discussed, I kept an appointment with the practitioner, and I walked into her office feeling upset. She asked me if everything was all right, and I told her it wasn't, because I needed to have surgery. I mentioned that I had kidney stones, and she immediately replied, "You don't have anything like that!" I thought that was strange because I'd only known Christian Science for a very short time. But we didn't talk about the subject of health any longer. We only spoke of the spiritual harmony of all of God's creation and of the divine laws that establish good as the norm for all His children. It was on these facts that the practitioner had based her remark that I was free of kidney stones. 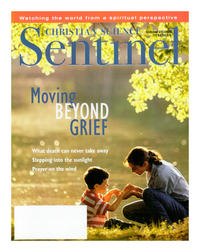