At about 6:30, three or four mornings a week, two men meet in Starbucks on Santa Cruz Avenue, Menlo Park. One, a retired minister, Walt Gerber; the other, a retired Silicon Valley venture capitalist, Wally Hawley. They talk about the church and about life in general.

Hawley was drawn to Menlo Park Presbyterian Church about ten years ago by the "amazingly constant and significant sermons" Gerber was giving from the pulpit. "I always felt his words were being directed straight at me," says Hawley. "Often, in full fight, he would stop and ask, 'So, what's in this for you?' And he'd draw me—and everybody else—and a simple message that we could use during the week and that always enhanced our relationship with Christ. 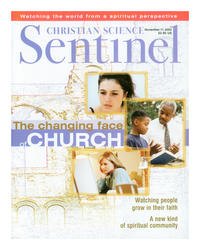