Slaves arrived in America a year before the Pilgrims, and while slavery was eliminated long ago, vestiges of racism cling to American society like extra sticky glue.

Widespread, racially based disturbances in Cincinnati following the killing of an unarmed black youth by a white policeman in that city serve as strong reminders that the race issue still is with us. Indeed, the problem of racial profiling by police is so pervasive, blacks have coined the term, DWB (driving while black). 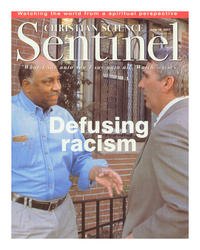