Very early in my study of Christian Science, our family had two significant healings. One was the healing of an earache my ten-year-old son had. When I picked him up at school one day, he was quiet, and didn't tell me why at first. Then he told me he had an earache. Our children had been attending Sunday School, and we had been studying Christian Science for two years, but none of us had been sick during this time. I had no idea what to do if I was going to turn to God instead of medicine.

I stopped the car at the corner where his newspapers were dropped for his paper route. I don't recall what I thought while he was delivering them and I was waiting for him. But at the end of that 45 minute period came one of the most precious moments in my life. When he returned, he was beaming with joy. His face was actually radiant. He said, "I used Christian Science on my earache." That was the end of that. 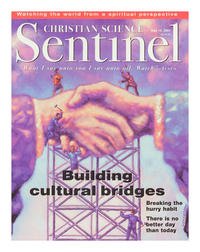