Recently two things came into my life which helped immeasurably to dispel the cloud of depression I was in following the passing of my husband. The first one was the Sentinel article "When God lets down His ladder" by Judith Hardy Olson (January 15). The second was the CD "Choose God." Its happy lilting music could revive anyone. 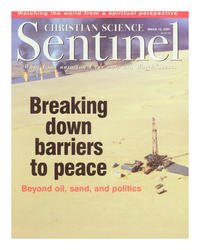