"Thanks so much for the spiritual boost as shown in these writings."

When the June 12 Sentinel arrived, I immediately read the encouraging articles on fatherhood, preceding Father's Day. As a mother of sons, I pray often to see this spiritual dimension become an intrinsic and primary part of men's lives. The scope of its appeal is reaching our culture in many ways, including bills in Congress regarding fatherhood. Thanks so much for the spiritual boost as shown in these writings. 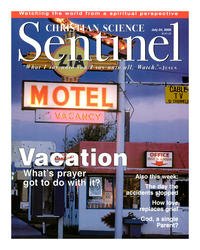