A comeback—and a step toward resurrection

Rita's basketball team was losing the game. The coach had told them to be aggressive, but she just felt clumsy and was fouling all over the place. Other players were yelling at her, accusing her of knocking into them on purpose. She felt "stupid," she said, and worse, because her teammates were misjudging her. Finally, she couldn't take it anymore. She walked to the bench, sat down, and cried.

Those of us listening to her story in Sunday School a few days later empathized. Failing is bad enough in itself, but "losing it" in public is high on most people's list of worst fears. You try hard to do a good job, and somehow miss. People whose respect matters to you are disappointed or critical. In one way or another, most of us know how it feels to want to walk out of the game and cry. 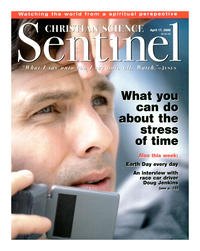