What's God got to do with computers?

A cartoon in The Christian Science Monitor portrayed a little man with a can of bug spray looking up with some bewilderment. He's standing in the shadow of an enormous bug. The caption reads: "The Millennium Bug" (July 31, 1998).

This refers to the Y2K (Year 2000) problem in computers that have been programmed with a two-digit date. When "99" (representing 1999) changes to "00," will the computer figure it as 1900 or as 2000? Chaos could result if the wrong conclusion is drawn. Even now, many skilled workers are addressing this problem, but the complexity and interdependence of computer systems have rendered the correction a formidable task. 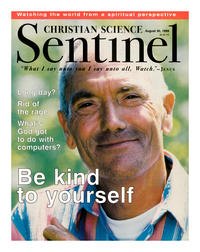