A man of faith (Part two)

After they crossed the Red Sea, or Reed Sea, Moses and his people were thankful that God had saved them from the Egyptians. Miriam, his sister, played a tambourine and led the other women in singing and dancing.

But the children of Israel needed the faith of Moses more than ever. They were still a long way from reaching Canaan, the Promised Land, and there were many situations ahead that would test their faith in the power of God. Moses helped them to trust. To not be afraid. To find God's help right where they were. 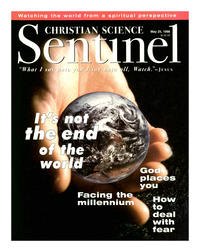