There's a little town near my home named Harmony. It lives up to its name, so far as I know. The story is told that when the townspeople decided to name their town back in its early days, a meeting was held for this purpose. Though their numbers were few, it seems several came with predetermined ideas about what it should be named. Germans, Norwegians, some Irish, and other groups had already made up their minds, and the arguments became increasingly heated.

When voices grew loud and tempers became hot, the one in charge of the meeting took up his gavel and pounded it loudly on the table. In the brief silence that followed, he looked earnestly at his fellow neighbors and pleaded, "Let's have harmony here!" At that instant someone said, "That's good! I like it!" And others chimed in, "Yes, let's name the town 'Harmony'!"

Send a comment to the editors
NEXT IN THIS ISSUE
Article
Elbowing your way to the top? 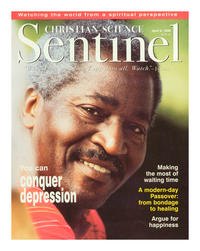