Abraham: a blessing to many

NEARLY four thousand years ago, long before Jesus, even long before Moses, lived a man called Abram, who was later known as Abraham. Abraham's high moral standards and remarkable spiritual insights shaped people's understanding of God for generations after him. In a sense, we could say that Abraham prepared the way for Moses and Jesus by getting people's thought ready for their teachings.

Although some of the experiences attributed to Abraham might be those of other members of his tribe, Abraham was a real person. You can find lots of information about him in chapters 11-25 of Genesis in the Bible. Abram was brought up in Ur, a town by the Euphrates River, not far from the Persian Gulf in to-day's Iraq. The people living there in his time were called the Chaldeans and worshiped many gods. But Abram believed in only one God. Imagine how strong his faith must have been in order not to be influenced by all the people around him who thought differently! 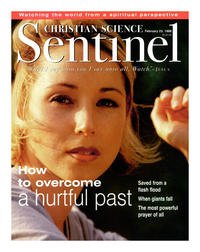