MOST of us at one time or another experience the feeling that we are not in control of what is going on. The Bible prophet Elijah found himself in a situation that seemed out of control (see I Kings, chap. 19). In fact, as far as he was concerned, he was the last true servant of God left. And he had been warned by an opponent that he would be sought out and killed within a day's time. Things seemed so bad that he fled into the wilderness and sought refuge in a cave.

When God called him out of the cave, he was taught a wonderful lesson about the powerlessness of what seemed so threatening to him. Elijah saw the fury of wind, earthquake, and fire. Yet he learned that the Lord was not in these apparently horrible forces. God was the only actual power, and divine power was evident in "a still small voice" (verse 12). As Elijah listened to and obeyed the voice of God, he lost his fear. His new understanding of and further obedience of God led him to a more complete grasp of His ability to govern and care for man constantly. Elijah was delivered from the threat of death, and he continued his mission of serving God.

Send a comment to the editors
NEXT IN THIS ISSUE
Article
What's your backup? 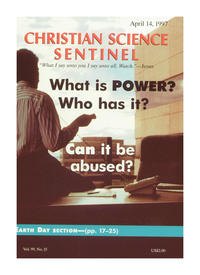