After being discharged from a psychiatric hospital, I lived for...

After being discharged from a psychiatric hospital, I lived for over thirty years in what is known as "home care." I was under the constant supervision of a caretaker. The psychiatrist at the hospital prescribed medication to manage schizophrenia, the diagnosed ailment. Every sixty days I was interviewed by a psychiatric social worker. I lived in constant fear of being recommitted to the hospital.

I resented being required to take medication, and I prayed daily to be healed. My father wrote to me and sent me a subscription to The Christian Science Monitor. He also made sure I had copies of the Bible and of Science and Health and the current issue of the Christian Science Quarterly so that I could study the Bible Lesson.

Send a comment to the editors
NEXT IN THIS ISSUE
Testimony of Healing
"Ye are a chosen generation, a royal priesthood, an holy nation,... 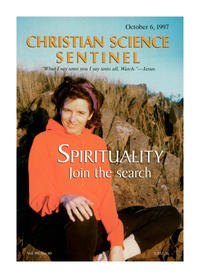