When our son was about one year old, he was instantly healed...

Suzanne B. Soulé with contributions from Barbara C. Soulé

When our son was about one year old, he was instantly healed, through prayer, of pain from a bee sting. We were almost home when he started to scream and cry, which was very unusual for him. As soon as I parked in our garage I held him and tried to find out what the trouble was. There was a bee on the back of his head, which I quickly brushed off. But there was still something dark on his head, which turned out to be the stinger. I immediately started to pray out loud. A sentence from Science and Health came to me: "All of God's creatures, moving in the harmony of Science, are harmless, useful, indestructible" (p. 514). By the time I took my son into my bathroom to get a pair of tweezers, he had stopped crying. The stinger came out easily, and I cleaned the small scratch. He was perfectly fine as I put him into his crib for a nap.

I felt that I needed to continue praying, however, to eliminate my own fear that there might be aftereffects. (When I was in elementary school I had been stung by a bee, and there had been swelling and discomfort.) As I read that week's Lesson-Sermon, found in the Christian Science Quarterly, it became very clear to me that just because certain conditions are present, there doesn't have to be the effect that human belief expects. Spiritual understanding replaces material beliefs with a recognition of the ever-present harmony of God's creation. I stopped expecting swelling, and there never was any.

Send a comment to the editors
NEXT IN THIS ISSUE
Testimony of Healing
"Trust in the Lord with all thine heart; and lean not unto thine... 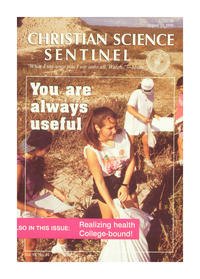