Some years ago, a science fiction film was released that explored what happens when the crew of a freighter takes on a vicious alien being. While the film had gruesome aspects, it also had an important message. The one crew member who survived was the only one who consistently tried to obey the rules. To me, underneath the violence and danger, the film was saying that those who ally themselves with their highest sense of law are the ones who will survive. It was this message that stayed with me. It made the movie memorable and even instructive.

At the time, I was working for a newspaper, and the thought provoking theme in what I felt was an unlikely place made me wonder if a trend was developing. With an eye toward writing a feature article on the subject—if there was, in fact, sufficient evidence—I decided to watch other new films being released at the time. Not much later, a film about a family that buys a home, only to discover that the house is demonically possessed, was released. This was hardly my favorite topic, but I thought that if a more intelligent trend in filmmaking was actually occurring, this film might say some new things about religion. Boy, was I wrong! Here, the overall message was the imagined omnipotence of evil and its ability to resist good; the mental images the film presented were vivid and awful. I was so mesmerized by them that I couldn't make myself leave, even though I wanted to. It took me a long time to cleanse myself of a feeling that evil could be hidden in something good.

Send a comment to the editors
NEXT IN THIS ISSUE
Article
What are we watching? 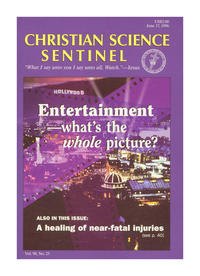