In South Africa, the Truth and Reconciliation Commission began its hearings last month under its chairman, Anglican Archbishop Desmond Tutu. The Commission is hearing grievances from those who suffered during the apartheid era, in the hope of burying past bitterness and helping individuals on both sides to make a fresh start.

Shortly before the hearings began, the evangelical organization African Enterprise convened a three-day Christian Leadership Assembly in the city of Pietermaritzburg. Its purpose was to address the lingering problems of violence in the province of KwaZulu-Natal and to pray for healing for the whole country, especially during the work of the Commission.

Send a comment to the editors
NEXT IN THIS ISSUE
Poem
Rejoice! 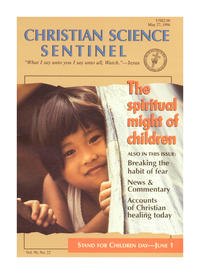