For many years I dreamed of writing this testimony about...

For many years I dreamed of writing this testimony about my son. He was imprisoned at the age of sixteen for a murder he had not committed. In April 1992 he was freed, almost twenty-three years later, by the Supreme Court of Canada. It was the first time this court had ever reversed a conviction. Now the healing is complete.

During my son's imprisonment there were days when I felt I couldn't go on. Then something in the weekly Christian Science Bible Lesson would light up for me and help me. One time in particular a friend of mine, a church member, told me that other members had said something to the effect that if I were really a good Christian Scientist, my son would not still be in prison. It came as such a blow that I hardly remember getting home, but I know I started to reread the Lesson.

Send a comment to the editors
NEXT IN THIS ISSUE
Testimony of Healing
Several years ago we had just completed the construction... 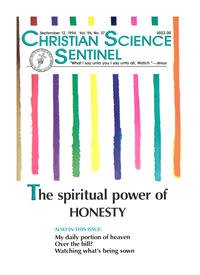