The government of The Mother Church

Editors' note: Mr. Peterson, a Christian Science practitioner and teacher, is a former President and also a former General Counsel of The First Church of Christ, Scientist. He has written previously on church government in a guest editorial in The Christian Science Journal, January 1992. The following is the first part of a two-part article that will conclude next week.

Spiritual blessings and joy always follow obedience to the Manual of The Mother Church by Mary Baker Eddy. Mrs. Eddy, the Discoverer and Founder of Christian Science, writes, "Of this I am sure, that each Rule and By-law in this Manual will increase the spirituality of him who obeys it, invigorate his capacity to heal the sick, to comfort such as mourn, and to awaken the sinner" (The First Church of Christ, Scientist, and Miscellany, p. 230). 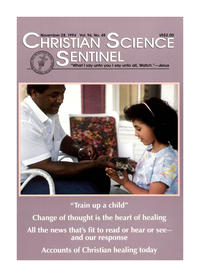