Bea Roegge: Friends, we are here with Corinne Teeter from Fort Lauderdale, Florida. Welcome, Corinne. Tell us about the incident you related to me earlier.

Corinne Teeter: I'm a Christian Science practitioner, and I devote my time to praying for people. One day the phone rang in my office, and it was a distraught young woman from City Hall. I didn't know the young lady, but she told me there was an emergency in the city, and that a truck had broken down on the railroad tracks near the big general hospital. It was a huge van truck and it was full of chemicals. The chemicals were in containers—very large, heavy containers—and they were beginning to leak. And the problem was that if the chemicals in one container mixed with the chemicals in another one of the containers, there would be an explosion and the whole end of the city would be flattened. And they had ordered the general hospital to be evacuated. It was that serious. 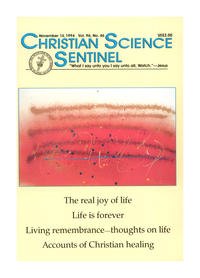