I would like to express my appreciation for the healing of...

I would like to express my appreciation for the healing of a long-standing problem. During my childhood and teenage years, I often suffered with a breathing difficulty. The symptoms would abate with the prayerful help of my mother or a Christian Science practitioner, yet the problem always would return again at a later time.

While I was in college, I suffered a very severe attack and found I could barely move around without becoming winded. I was quite fearful. My mother, who had prayed for me many times in the past, was out of the state on vacation. I called a practitioner for help. I also studied and prayed like never before. I was fed up with having to deal with this condition, and fought it mentally with the understanding that it had never been a part of my true spiritual being. It became clear to me that I could not have anything that didn't come from God, because I was His reflection. I knew God to be the source of my strength and activity, which were uninhibited by illness and mere mortal belief. The words of a hymn reassured me that "in atmosphere of Love divine,/ We live, and move, and breathe" (Christian Science Hymnal, No. 144). 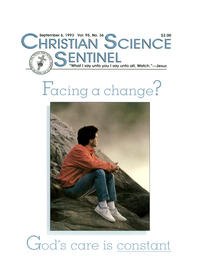