The circulation of good

From potato chips to computer chips, all kinds of things circulate in the world. Goods and services circulate internationally through a global trading network. Water circulates— rain clouds to lakes and rivers and oceans to rain clouds again. Money circulates. In my change the other day I found a penny that was dated 1941. I couldn't help wondering how many miles it had traveled and how many hands it had passed through during the past fifty years. Perhaps it had sailed on a troopship across the Atlantic and returned with a soldier after World War II. Or helped a small child buy cotton candy at a state fair in Iowa. Or visited the White House in the pocket of a president.

Of course, not only do things circulate but so do ideas. One of the most significant conveyors of ideas in the world today is the magazine you're reading right now, the Christian Science Sentinel, as well as its sister publications, The Christian Science Journal and the various foreign-language editions of The Herald of Christian Science. We realize that, as the Editors of these magazines, it might seem we have something of a vested interest in making this claim. Yet for more than a century, the religious periodicals established by Mary Baker Eddy, the Discoverer and Founder of Christian Science, have proved to be powerful tools for helping people pray and bring the healing truths of Christian Science into action in solving the many problems confronting humanity. And these magazines have also proved to be particularly effective for sharing spiritual truths with our neighbors to help them realize God's power to heal in their own lives. 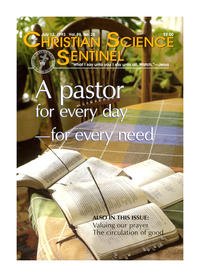