Christopher Columbus did not leave behind a flat world and set out in search of a round one. Nor did he intend to change a flat world and make it round. But as a result of his journey, people did gain a more accurate view of our planet and its continents.

A man who lived many years before Columbus presented a view of the world that was far more radical. Christ Jesus devoted his life to proving to a skeptical population that our world is not structured as our physical senses would have us believe. He understood and demonstrated the present reality of spiritual existence. Jesus did not attempt to change a physical world into a spiritual one. Nor did he suggest that we leave behind an existing physical world and wander the galaxy in search of a spiritual one. He stated clearly that "the kingdom of heaven is at hand."

Send a comment to the editors
NEXT IN THIS ISSUE
Article
Why are we here? 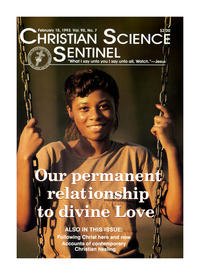