After our son began to learn to talk, we noticed that he...

After our son began to learn to talk, we noticed that he seemed unable to say certain sounds. And he would replace the sound he couldn't pronounce with one that he could. His "tr" and "j" sounds were replaced with the "g" sound, for instance, and for "s" he used "l." At first, we (and everyone else, it seemed) found this to be rather cute and believed it was something he would outgrow. But later, we began to pray to see our son's speech abilities as God-given and therefore complete and perfect. When he was around four and a half, our son was still using the same sounds, and his preschool teacher expressed concern over his speech. We talked, and I assured her that we were addressing the situation.

Our prayers were based on what Christ Jesus taught in his many healings. One such healing that my husband and I turned to continually was Jesus' healing of the deaf man with an impediment in his speech.

Send a comment to the editors
NEXT IN THIS ISSUE
Testimony of Healing
I have enjoyed so many testimonies in the Christian Science... 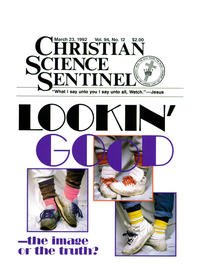