When the way seems blocked, even repeatedly, we can listen for God's direction— which always satisfies.

One day, according to an old folk tale, the devil was going out of business, and he put all his tools up for sale. He was asked why the tool called "discouragement," which was very worn, should be priced so high. The devil replied that he could get inside a person's thought with it when he couldn't get near with any of the other tools. And once inside he could use a person in whatever way suited him best. "Discouragement" was so worn, he said, because he used it with nearly everybody, since very few people yet knew that it belonged to him.

Send a comment to the editors
NEXT IN THIS ISSUE
Article
Prayer: watching and working 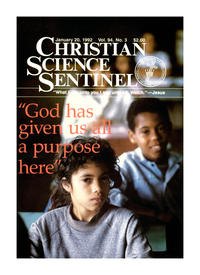