"Forgiveness and repentance ... it's a constant process"

with contributions from Eugene Markovitz

You couldn't help noticing the article in Time magazine. Four New Jersey boys in their early teens were convicted of painting antisemitic graffiti on a synagogue and the homes of Jewish residents in suburban New Jersey. The local rabbi asked the judge if he could work with the boys—talk with them over a period of several months—in the hope that this might do more to overcome prejudice than conventional punishment would accomplish. The court agreed.

What struck us most about the article was the rabbi's patience in attempting to bring about change. We thought it might be useful to get in touch with him to learn more of his approach to overcoming prejudice. 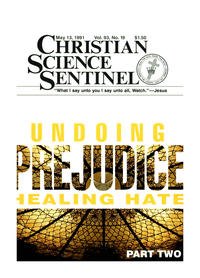