Spiritual warfare against sin and disease may not generally make the evening news, but it remains at the heart of humanity's progress.

Have you ever marveled at the courage shown by the early Christians of the NewTestament—individuals like Peter, John, Paul? The Apostle Paul suffered beatings, angry mobs, shipwrecks, false imprisonment—just about every variety of physical abuse imaginable. "Thrice was I beaten with rods," Paul says in a letter to the Corinthians, "once was I stoned, thrice I suffered shipwreck." Like a warrior entering battle, he must have faced and defeated fear many times.

Who can really say that the time of "perils" like these is past? Don't our times call for Christian warriors just as much as Paul's time did? Courage that bears witness to spiritual truth is not an out-of-date virtue. Something happened in our neighborhood not long ago which brought this lesson home to me. 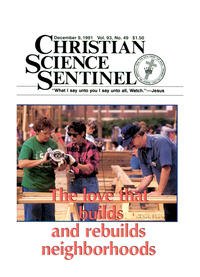