We were expecting houseguests who were driving four...

We were expecting houseguests who were driving four hundred miles and would arrive in time for dinner. That day I woke with a sick headache, unable to do any of things I had planned to do, including preparing dinner. I called a Christian Science practitioner, who agreed to pray with me. Then I mentioned all the things I had to do and added that these headaches usually kept me in bed for several days. I called her several times during the day and reminded her of all that I had to do. Finally I called my husband at his office and told him he would have to come home and do a few things and then take our guests out to dinner.

Then I called the practitioner again. After listening to my story once more, she gently pointed out that I had been emphasizing the difficulties, exalting what was error about God's control of His creation, and wasn't it time to exalt God, or Truth? In a flash I saw what I'd been doing. When I turned from the telephone I realized I was completely healed. By the time my husband got home, I was dressed, had dinner started, and was ready for our friends' arrival. Never again was I troubled by sick headaches.

Send a comment to the editors
NEXT IN THIS ISSUE
Testimony of Healing
About ten years ago, a lump on the back of my head began... 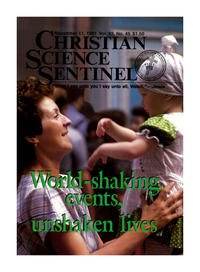