How it will come about

Perhaps the most agonizing thing about captivity is not knowing when it will end. In ancient times the Israelites endured several long periods of captivity. One imagines quiet conversations between friends hoping and speculating about how freedom might finally come. They must have helped one another overcome discouragement when tempted to fear that their religious teachings could fade out.

Modern captivities have startling parallels with Biblical ones. In recent months we've watched former political prisoners and exiles rise to positions of leadership as ruthless governments have toppled.

Send a comment to the editors
NEXT IN THIS ISSUE
Editorial
How far does Love go? 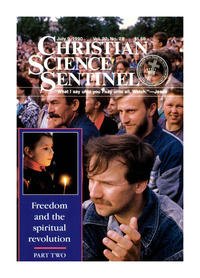