When we face challenges, we often find—if we look—that we do have the God-given ability to meet them.

During a recent rereading of Science and Health, I was struck by Mrs. Eddy's statement about her discovery of Christian Science, "God had been graciously preparing me during many years for the reception of this final revelation of the absolute divine Principle of scientific mental healing." Science and Health, p. 107. Since I had been reading a biography of Mrs. Eddy not long before, I thought of all the grim and tormenting experiences she had endured during the years before her discovery and I began to wonder just what she had meant by gracious preparation.

To find out what she herself had said about her early life, I reread Retrospection and Introspection. There, she briefly mentions the death of her husband George Glover, the loss of her son, her illness, and so on. See Ret., pp. 19–22, 24 . But I was struck by the considerable space she devoted to two episodes in which she confronted the doctrine of predestination. See ibid., pp. 13–15 . The first is an account of a healing she had of a fever induced by her struggles with her father's "relentless theology." Through obedience to her mother's encouragement to "lean on God's love" she was restored to health. The second episode describes her admission into the Congregational Church despite her refusal to accept the doctrine that her brothers and sisters might be foreordained to damnation. 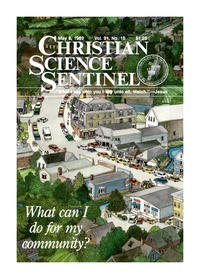