At the heart of Christian forgiveness there is a great truth. And when we grasp it, we find the understanding that enables us to forgive as Jesus did.

During an intramural football game in college, another player intentionally punched me in the face. I did not react violently but responded with Christianly compassion for this other fellow, whom I had never before met. He then punched me again—with a hook to the same spot on the jaw. I remained silent and did not retaliate. Our teammates jumped between us and took both of us out of the game in order to prevent any further conflict.

As I was standing on the sidelines, my teammates, trying to be supportive(!), told me that he had hit me really hard. Some remarked that my jaw was swelling and that it would soon be black-and-blue. Others asked me why I had not fought back. They knew of my high-school football and wrestling honors, and they repeatedly said, "You could have handled him." (I was later told that this other fellow had just returned from military service in Southeast Asia and was still living in his world of combat.) 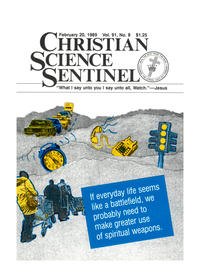