I had once read about Chesapeake Bay retrievers and was intrigued by their reputed tenacity and fierce loyalty. Yet I never actually had the pleasure of meeting one—at least not until a friend and I stayed at an old fishing camp in the north woods of Maine last summer. One of the guides on the lake had a muscular, sandy-brown bolt of lightning that I discovered was a true pedigreed Chesapeake. And from the first face-to-face encounter, I knew that this particular dog was unusual. You could see it in his eyes.

As he soon let us know, his world seemed to be centered on a devotion to retrieving sticks! There were long ones, short ones, stubby ones, skinny ones, even twigs and small broken saplings. (We watched him early one morning browsing among the bushes, selectively eating the leaves in an attempt, it appeared, to produce even more usable sticks around the camp.) Actually, any stick would do, as long as it could be employed for one of two purposes: tug of war (at which the dog was clearly invincible) or tossing it into the lake from the hillside where the cabins were situated (and, again, at "lake toss" the dog was not only unbeatable but unflagging in his single-minded pursuit). 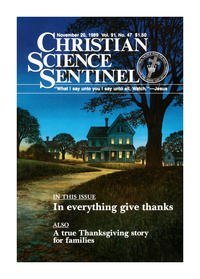