The search for security

In a world where violence is pictured as an almost constant threat, the effort and expense aimed at attempting to keep us safe is staggering. And yet people's fears are not easily quieted even by the most sophisticated efforts. In fact, it can occasionally feel as if we're being made captive to some of our own security measures, and there is considerable doubt expressed that institutions, governments, or technology can provide the ultimate answers for our protection. 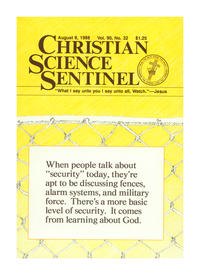