Two years ago in the winter I had a severe case of flu, and I suffered...

Two years ago in the winter I had a severe case of flu, and I suffered from the condition in various forms on into the summer. A year later symptoms of the same condition appeared again, and the thought came to me that I had better "take it easy." But in a moment I challenged this suggestion and declared that I would not sit there and simply submit to the condition. That was the turning point in the healing for me.

I recognized that none of the various symptoms such as fever, congestion, and cough could be a real part of me, because man is actually the spiritual, perfect idea of God. I was freed through spiritual truths that reversed the symptoms of illness. The first two sentences of "the scientific statement of being" on page 468 of the Christian Science textbook, Science and Health by Mrs. Eddy, were particularly helpful. They state: "There is no life, truth, intelligence, nor substance in matter. All is infinite Mind and its infinite manifestation, for God is All-in-all."

Send a comment to the editors
NEXT IN THIS ISSUE
Testimony of Healing
Over the years, through the study and application of Christian Science,... 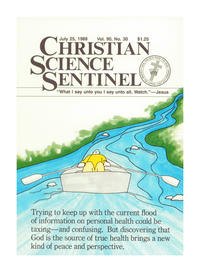