The Christian demand for forgiveness

Forgiving isn't always easy. But it is always possible— through a better understanding of God as infinite Love.

Have you ever wanted to forgive but felt you just couldn't? Carrying around a burden of anger and resentment is a hard way for anyone to live, but for a Christian it's really tough. That's because Christians know that the Master, Christ Jesus, placed great importance on forgiveness. The eighteenth chapter of Matthew's Gospel reports a conversation he had with Peter, who asked, "Lord, how oft shall my brother sin against me, and I forgive him? till seven times?" Jesus' reply shows the unconditional nature of the forgiveness he advocated: "I say not unto thee, Until seven times: but, Until seventy times seven." Matt. 18:21,22.

The discovery of a need to forgive—something everyone feels at times—begins in one's own heart when one is willing to let go of resentment toward another. But this demands a self-sacrifice that can come only as an individual draws on the power of God, who is Love. 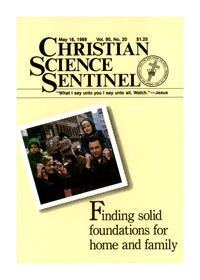