My mother lost her voice when a surgeon who was removing...

My mother lost her voice when a surgeon who was removing an internal goiter accidentally severed her vocal cord. The surgeon told my parents that my mother would be unable to speak again. She didn't speak for months. At that point a neighbor told her that Christian Science could heal her. My mother was desperate and willing to try Science. She visited a Christian Science practitioner, who prayed for her; my mother came out of the practitioner's office talking.

Mother didn't take up the study of Christian Science at this time. Several years later a boy was swinging his coat around and struck one of my brothers in the eye with a button on his coat. The accident caused my brother to lose his sight in one eye, and this in turn affected the other eye. My parents took him to a specialist, who said nothing could be done for my brother except an operation that the doctor couldn't guarantee would enable him to see again. The date for the operation was set for Wednesday. 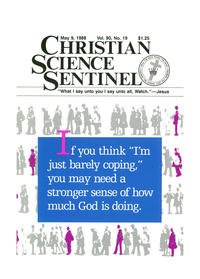