The search for "the majesty of man"

with contributions from Robert C. Nelson

Journalism can be a hard-knocks enterprise. Reporters and camera crews not only go where the action is; they may even become the action. How does such hard-hitting journalism affect our vision of humanity's future? Is there a place for a spiritual perspective in contemporary journalism? These are some of the themes we discussed with longtime newsman Robert C. Nelson.

Mr. Nelson, a Christian Scientist, has worked in journalism since his days as an undergraduate at Northwestern University. He joined The Christian Science Monitor in 1954, and his reporting has included assignments in Northern Ireland and the American South during the 1960s civil rights protests. He has also served as national news and feature editor for the Monitor, taken part in the weekly Editors' Round Table with MonitoRadio, and anchored the television program The Christian Science Monitor Reports. He was a Neiman Fellow at Harvard University from 1969 to 1970. He is currently working on several special projects for Monitor television. 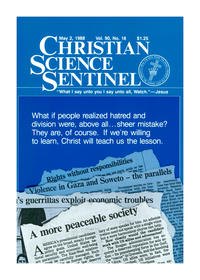