Woman's place and the uses of prayer

At the end of the first rehearsal of the college choir, the director made a few comments about the music we were singing and quoted a verse from II Timothy: "Study to shew thyself approved unto God, a workman that needeth not to be ashamed, rightly dividing the word of truth." II Tim. 2:15. Then she explained, specifically, how it applied to our performance. The quality of our music—voice control, concentration, harmonics—would be improved if we were more attuned to God's approval, and listening to Him. She liked to think of singing as a means of praising our Father rather than impressing an audience.

This was the first time in a professional setting that I had encountered someone who actually stated publicly that Bible teachings have a bearing on ordinary undertakings and decisions. That you can expect God's help—literally—by praying to be close to Him. 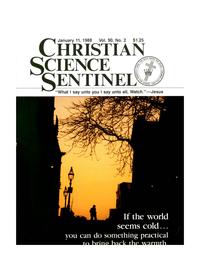