How Christian Scientists care for their families: a helpful explanation

Early Christians quite naturally turned to God for physical healing—for some three hundred years after Christ Jesus' ministry. Today a growing number of Christians are again healing through prayer. In fact, at the beginning of this decade a Gallup poll found that more than seven and a half million people in the United States have experienced such healing. But is this more than a temporary phenomenon? Can Christian healing be practiced consistently enough to meet the needs of a twentieth-century family? "Yes," say Christian Scientists, who have been relying on a highly developed approach to spiritual healing for over a hundred years now.

Christian Scientists are often asked for an explanation of their healing ministry, of just how they care for themselves and their families. The Atlanta Center for Disease Control (an agency of the United States government which closely monitors public health matters) recently requested such an explanation. The statement provided by the Committee on Publication is printed below. 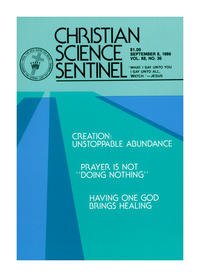