The bell at Lincoln's Inn, one of the four Inns of Court in London, is normally silent. But should it peal in the early afternoon, it is announcing the death of a barrister. Upon hearing the bell, other barristers can send a clerk to learn the name of their colleague.

John Donne surely would have known of the bell's somber message. Donne, the seventeenth-century English minister and poet, had once been a law student at Lincoln's Inn, and later he delivered his sermons there for several years. 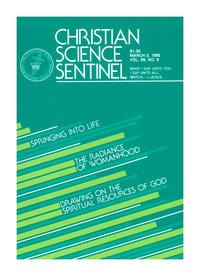