Our constructive influence in the world

Even in moments of utter solitude—whether wasted in apathetic idleness or invested in prayer—each of us contributes an influence to world thought. Shouldn't we strive at all times to be an influence for good, to encourage genuine progress for all? The teachings of our shining Exemplar, Christ Jesus, enable us to discern in what direction enduring progress lies. His practice bids us to watch for Truth's appearing and to defend ourselves against whatever would claim to divert or deter the spiritual quickening this brings.

In Judea two thousand years ago, civil law and government were enforced through pagan domination. Terrorism and brutal oppression seemed normal. The sensual way of life was prestigious, making materiality seem not only attractive but authoritative. While the Judaic religious leadership demanded formal obedience to the moral code derived from Scripture, their influence often preyed on fear of punishment. It was not wholly spiritual and to that extent was corrupt. Jesus, however, so fully exemplified the Christ, the divine influence in human consciousness, that he was impervious to these false influences that would, if they could, have put an end to his mission. He rose in resurrection above the crucifixion perpetrated by these crass and cruel influences. The result was, as Mary Baker Eddy comments in Science and Health with Key to the Scriptures, "Those who slew him to stay his influence perpetuated and extended it." Science and Health, p. 43. 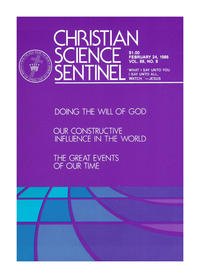