The dragon that ate up the sun

Many , many years ago there were people who believed that a dragon lived in the sky. Franklyn M. Branley, Eclipses: Darkness in Daytime (New York: Thomas Y. Crowell, 1973), p. 18 . Sometimes—they didn't know why—the dragon would get angry with them. "When the dragon gets really angry with us, he takes away the sun. He eats the sun up, bit by bit, until it's all gone. Suddenly, even though it's daytime, there is no light at all," the people told each other.

Naturally the sun was very important to these people. They knew it kept them warm. It made food grow. It lighted their world. When the sun disappeared, the people feared it was gone forever. Could it be that from then on there would be only nighttime—no day at all?

Send a comment to the editors
NEXT IN THIS ISSUE
Testimony of Healing
When I was nineteen a friend invited me to visit the Christian Science... 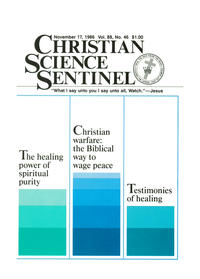