I am grateful to have had the privilege of attending the Sunday School...

I am grateful to have had the privilege of attending the Sunday School of The Mother Church in Boston from the age of four until I was twenty. There I learned many wonderful spiritual truths. Later I became a member of The Mother Church, joined a branch Church of Christ, Scientist, and had Christian Science class instruction.

Several years after I completed Sunday School, I married, and later we had a little daughter. One day I noticed that our daughter's eyes were discharging. My husband, who was not a Christian Scientist at that time, said, "Why don't you take her to a doctor?" After a few moments I told my husband that I'd like to try Christian Science. He agreed to this, and so I phoned a dear friend— a devout Christian Scientist—and asked for her help. She said that she would pray for us. The next day the child's eyes were normal. This was the end of the difficulty. 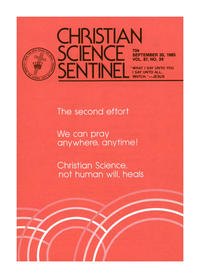