My mother and I were very close. I felt flattered when people would say, "You're so like your mother." She was a lovely individual, intelligent and capable. I wanted to be like her.

But sometimes my mother would comment on herself as being a "slow starter," and many mornings she voiced general discouragement. Later I found my mornings difficult, too. After I began to study Christian Science, I frequently pondered Mrs. Eddy's phrase "aggressive mental suggestion," which is a term for the false beliefs that suggest man is a mortal. I wondered, "Have I accepted my mother's morning despondency as part of my heritage? Wouldn't such acceptance be an example of aggressive mental suggestion?" I had liked thinking I had inherited my mother's good qualities, but what about the not-so-good? Could I choose to inherit my mother's good qualities but refuse the others? Certainly not, if I believed in human inheritance. I was stuck with a combination of the good and the bad. 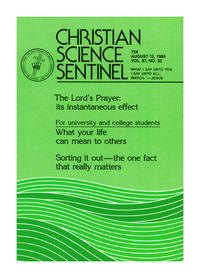