One Halloween, when our daughter was about four years old, she had chosen a witch costume—tall hat, clawed gloves, and a mask with psychedelic green eyes and fang teeth. She could hardly wait to wear it.

But on Halloween night it was pouring rain, and she appeared to have a heavy cold; so I decided not to let her go out gathering candy from door to door, as was the custom for the children in our neighborhood. She was heartbroken until I told her she could put on her costume and wear it around the house. Not long after, she was dancing around, uttering awful squeals. 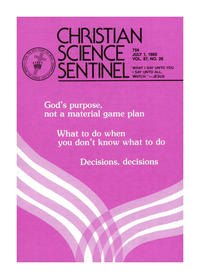