A jazz musician talks about what changed his life

When former Doobie Brothers band member Cornelius Bumpus says he wants to bring purity to audiences, he is talking about more than the technical quality or the sound of his music. He is concerned about healing, and the reason is that a Christian Science healing has made all the difference in his life. He began playing saxophone at age ten. When he was in his teens, he worked nights as a musician, and by day he did other jobs. In 1979 he was asked to become a part of the Doobie Brothers band. This included major road tours and recordings. When the Doobies split up, he worked with his own "jazz fusion" group, performing jazz with elements added from Latin, blues, rock, and reggae. But in this interview with William Holland, Mr. Bumpus, who is a member of The Mother Church and a branch church, talks about the turning point in his life. 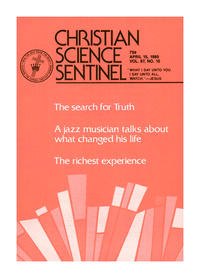