King David had much need to seek peace—from what we can learn in the account of his life in the Old Testament. Israel, over which he ruled, was at war with its neighbors, and internal political struggle plagued his kingship through much of his reign. But his greatest battles were with himself.

For example, after his adulterous relationship with Bathsheba and his complicity in her husband's death, David was sharply reprimanded in a parable related to him by the prophet Nathan. David suffered intense pangs of conscience and sought repentance through prayer and fasting. See II Sam., chaps. 11-12 . His material wealth and enormous political power were of no help to him in this struggle; his peace could be restored only when he had reestablished his integrity and his obedience to God. 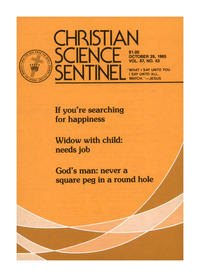