Are you being manipulated?

How often do you come to your own conclusions without any influence from others? Are you really doing your own thinking and making your decisions free from interference? In our society today we're constantly being conditioned, influenced, almost bombarded, by the immense, sometimes subtle, influence of unethical advertising.

Little has been widely proposed as an effective remedy for this problem. But an understanding of God as the divine Mind— the one controlling and motivating power, revealed in Christian Science—offers a real remedy for such subversive influences as propaganda that, perhaps unwittingly, promotes disease by promoting material remedies for disease. Through prayer—a realization of the presence and power of God as the one Mind—we have a sure release from mental manipulation. 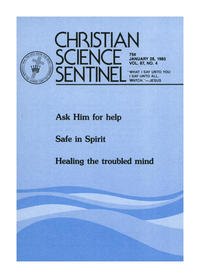