The "straw that broke the camel's back" is no more real than a mirage in the camel's native desert. The old saying—used to describe a final difficulty which, added on top of all the others, brings collapse—expresses a mental attitude or point of view rather than a basic truth. It indicates an impression of oneself or others as essentially finite and very limited in capacity.

Actually, many ordinary people, under necessity, find they can greatly exceed their own supposed limits. Sometimes they are driven to it by fear of the consequences. Others, however, have felt spiritually sustained instead of humanly driven. Prisoners of war, people on life rafts adrift at sea, those who are carrying their own burdens while caring for others, have often told of finding remarkable inner reserves when they reached out to God. Mary Baker Eddy, who discovered Christian Science, was interested in such examples of people who had experienced this expanded capacity. In Science and Health with Key to the Scriptures she writes, "The explanation lies in the support which they derived from the divine law, rising above the human." Science and Health, p. 385. 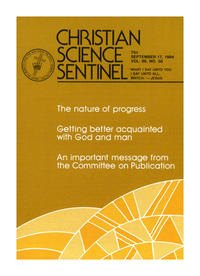